Menu
Facebook
It is a lovely school with a welcoming feel and a positive atmosphere. Much more visible leadership team. A feeling of pride in the school. As parents we feel really proud that our son comes to such a great school, which we knew was fabulous whether OFSTED told us or not! The trips that Mrs Glover & Mrs Sear have been putting together are a fantastic idea and hope they continue. I am extremely happy with Daniel's progress since starting at the Pre-School. He seems to have made a lovely group of friends and enjoys coming in every day. I can't wait to see him progress further. Senior & middle leaders know the strengths of their staff & deploy them accordingly. More tailored support for different groups of learners has been a really big & positive change. Thank you! The Headteacher has a clear vision for the school & her ambition for it to continue to make improvements is shared by her senior team & staff.

We are delighted to announce that we have achieved the School Games
Mark GOLD Award for the 2016/17 academic year.
The School Games Mark is a Government led award scheme launched in
2012, facilitated by the Youth Sport Trust to reward schools for their commitment
to the development of competition across their school and into the
community, and we are delighted to have been recognised for our success.
Our sporting achievements this year include:
With a total of young people competing in local inter-school
competitions this year, we are extremely proud of our pupils for their dedication
to all aspects of school sport, including those young volunteers,
leaders and officials who made our competitions possible.
As part of our application, we were asked to fulfil criteria in the areas of
participation, competition, workforce and clubs, and we are pleased that
the hard work of everyone at our school has been rewarded this year.
A special thanks to:
We look forward to applying once again in 2018!

We are a school that has always been very committed to promoting healthy life-styles.  We employ a qualified teacher, Mr Holyer, who has a P.E. specialism, to deliver the curriculum across the whole school.  Ms Whichcord, our Deputy Headteacher, brings a lot of knowledge, skills and experience in all aspects of P.E and Sports from her previous role as a P.E. faculty head in secondary schools.  She helped devise curriculum schemes of work for primary and secondary schools and brings this wealth of experience to Cliftonville Primary School.

Cliftonville Primary School has been awarded the Silver School Games Mark award for our commitment, engagement and delivery of competitive school sport in 2015/2016.  We are hugely proud of the children and staff...and parents who support in so many ways, including transport and cheering from the side on wet and windy tournament days!!

This is a wonderful achievement for all staff and children at the school who have trained and participated in a wide variety of competitions in school and across Thanet. A big thank you must go to Mr Holyer, Mrs Adams and Mr Kirby for organising these tournaments and who are spotted regularly around Thanet evenings and weekends with teams of children supporting and encouraging them to be the best that they can be.

Our school has signed up to a local scheme known as ‘Thanet Super Passport’ along with over two thirds of the schools in the District. The scheme was developed by schools for schools, more specifically Ursuline College working in partnership with local providers. The idea was formed following an initial meeting in the summer term 2013 to understand our schools specific needs and challenges in relation to Physical Education and Sport. As a result of the meetings Super Passport was designed as a tailored packed aimed to help schools individually focus on improving the quality and breadth of PE and Sport in their school now and long past the funding ending, but also came with it opportunities to collaborate with other schools & share practice and ideas. This has become increasingly difficult to continue over the years.

As a Super Passport member, our school is benefiting from:

schools in the area across the school year

Subject lead support for the School PE co-ordinator. There are six termly networking meetings for our subject lead to attend

issues &/or challenges in PE and school sport, and finding local solutions

National membership to the Youth Sport Trust and British Gymnastics. We are receiving national insight on PE, sport, health,

The opportunity to work with other schools on working towards awards such as YST Quality Mark and School Games Kitemark,

An end of year report, outlining the support given to our school

Access to a range of bespoke & local opportunities, across 7 priority areas as identified by schools in Thanet, these include:

2. Improving the Quality of Physical Education

3. Extending the range of PE provision

7. Links to the Community

On Tuesday 18th October 2016 we welcomed Laviai Neilson to our school.  She is an up and coming sprinter and was the fastest junior in the world last year over 400m.  Laviai was  inspired by being a kit carrier at the London 2012 Olympics.

'I stood behind Jessica Ennis and when she came out the crowd cheering was the loudest thing I've heard in my life,' says Laviai. 'I thought, "I want that". I was worried about getting muscular from athletics when I was younger but Jess showed me that you can be beautiful and inspirational.'

Laviai met with KS1 and KS2 in special assemblies before spending the rest of the day working with Mr Holyer. 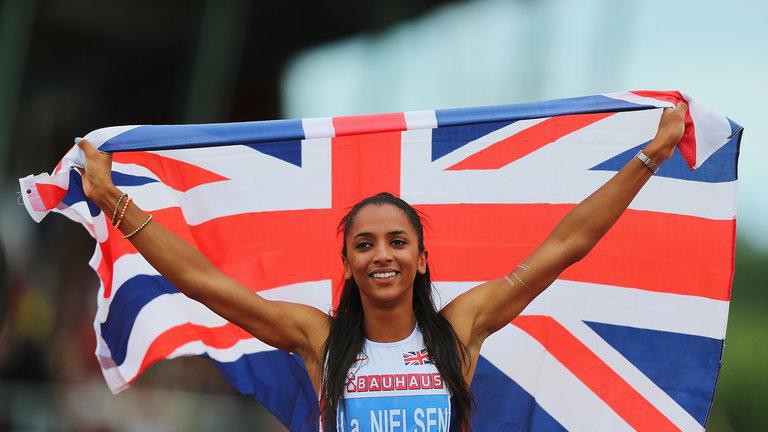 We had the pleasure of welcoming Olympic swimmer and Inspire mentor back to Cliftonville. Throughout the morning Chris inspired our children yet again to think about their dreams and aspirations (linking in very well with our values). In workshops with Year 4, Chris worked with all the children, thinking about what makes people successful and how they can become even more successful. This complemented our schools values and in particular the Y4 value of aspiration. 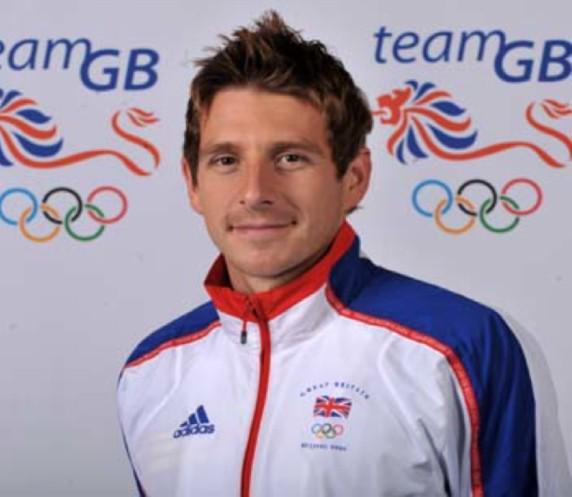 Olympic champion Lizzy Yarnold gave pupils a fascinating insight into her life as a world class athlete when she visited Cliftonville Primary School.

Lizzy, 25, told how she is determined to improve on the 90mph speed she set on her skeleton board to take gold medal at the 2014 Winter Olympics in Sochi.  She explained how her body is so close to the ice run during her performances that her protective headgear gets damaged where her chin is just centimetres from the ground at incredible speeds.

Using a PE bench to simulate her sled, she demonstrated her race position and gave pupils and staff the chance to try it out wearing her race helmet.

Lizzy was very keen on sport as a teenager at school in Maidstone, and was introduced to skeleton racing in 2008 through UK Sport’s Girls4Gold talent search.

She began competing in 2010 and won her first official race in the Europa Cup, in November 2010. The following seasons found her learning tracks, developing her skeleton-racing skills and achieving the athletic performance required to compete at the highest World Cup level.

She told pupils: “Skeleton is a crazy and mad sport but I love it. It is like plunging down a water flume at top speeds only on ice so very close to the ground.  I am a bit of an adrenalin junkie so going fast is perfect for me. I do get nervous and a little scared but I always know that I want to give it a go and I am determined to do my very best.”

She answered a variety of questions from pupils, including some from the new Cliftonville Pupil Sports Council, and gave inspirational answers, as well as showing them her gold medal and signing a sports shirt.

The visit was organised through the Inspire Kent programme which aims to maintain the legacy of the London Olympics in 2012 and engage young people in a range of activities including sports.

Lizzy was appointed and MBE for her services to the sport in the 2014 Birthday Honours. 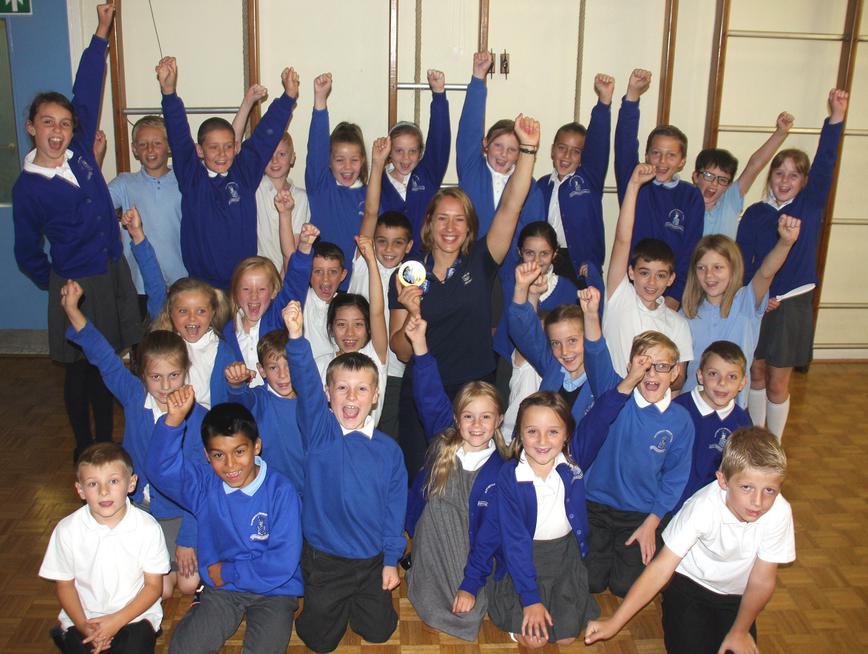